History of the Rehabilitation Society of Calgary 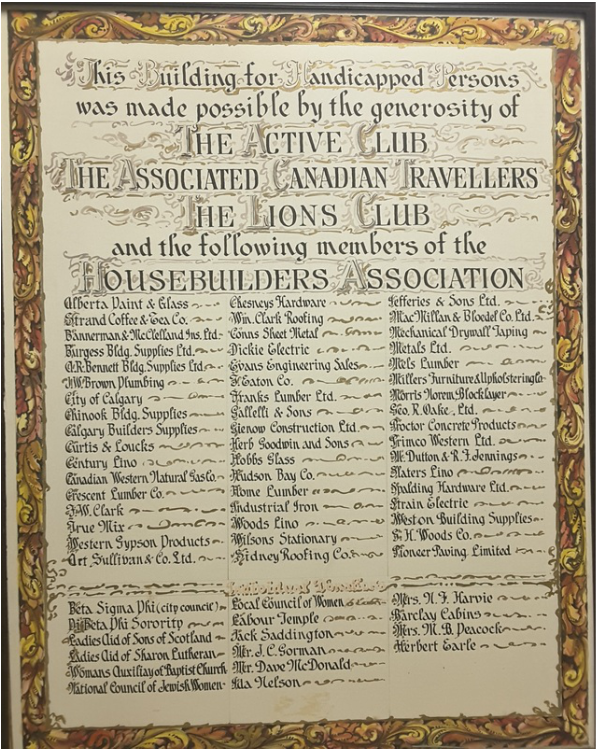 This picture hangs in the office at the Rehabilitation Society of Calgary.
We are all indebted to those who have laid the foundation for this place and worked so hard at creating a loving, peaceful community, where all people - regardless of ability - are unconditionally accepted.

The Rehabilitation Society for the Handicapped was founded as a registered society in Alberta in December of 1958. It was one of the first organizations in the province to tackle the issues presenting themselves to those with (at that time primarily physical) disabilities. That initial group consisted of persons with a disability who defined problems and workable or desirable solutions, and collaborated with other community volunteers where support was needed to implement them. The Society has a remarkable 60-year history of assessing and adapting to emergent needs and issues, staying innovative and relevant through many different incarnations.

Among its many innovations and accomplishments are: the first schoolroom for children in wheelchairs, the first public swim program for persons with physical disabilities, a co-op loan program that helped to finance wheelchairs to housebound individuals, a wheelchair square-dance group that performed at the Calgary Stampede, and the spin-off industrial training center that for many years was Langevin Enterprises.

Through the 1980’s and early 1990’s there were many social changes, and many changes in the non-profit sector. Due to collaborative action and new social policies there was a much higher standard of public inclusion and accessibility – in particular for those with mobility related issues. The funders and the community agencies themselves became more sophisticated and, in a sense, professionalized. The people who needed the kind of member-owned environment that was the Rehabilitation Society now tended to be individuals with more complex needs and challenges. These people also had less experience with the skill base now necessary to maintain their organization and facility.
In the mid-1990’s the Society embarked on an evaluation and redevelopment process in order to refocus on the relevant kinds of needs within the disabled community and the new world of funding and non-profit management; as historically it had done several times before.

This process led to a reaching-out to a more diverse clientele, in recognition of the limited opportunities for those with more severe and/or complex needs; inclusive of many individuals with significant emotional and intellectual challenges. The evaluation reconfirmed the need for a peer-driven environment in which individuals could learn, work, and play as they chose for themselves. The Rehabilitation Society rebuilt a language and culture that was accessible to a diverse range of ability, and developed a Community Centre Model that would allow them to be responsive, and as always, member-owned, member-run. The Society established a two-full time position staffing model of collaborative management that they believed was sustainable, made some significant repairs and improvements to their facility, and began reaching out and building working partnerships with other community organizations.

They came from all parts of Calgary, and even from outside of Calgary. They came in wheelchairs, on crutches, walkers and canes. They came very early by HandiBus, so that another group would be able to come on a second shift. The less disabled came by City Transit and cars, as did many volunteers, board and staff members. They met and visited with people they hadn’t seen or heard of for years, heard speakers outline their many accomplishments and were royally fed and entertained.

They were the members of the Rehabilitation Society of Calgary for the Handicapped and they were celebrating their twenty-fifth anniversary as an incorporated organization. They were in their very own activity centre at 1112 Memorial Dr. N.E. The day was Thursday, May 22, 1975, and the occasion was also the Annual Meeting of the Society Board of Directors and of the Members’ Social Club.

This was a memorable evening for everyone present, but was especially memorable for those founding members who were able to attend. They were the ones who had played such an important part in helping the society grow from a little group of handicapped persons gathering at members’ homes for social contact, to the diverse organization it had become. Among the old timers were:

Mamie Martin was their first volunteer helper, the person who offered her home for their first meeting, who encouraged them through the difficult early years, who enlisted the aid of their first professional advisor, Dr. Ruth Gorman, and thereby put them on the road to success received a specially warm welcome, and with good reason.
This meeting had also been chosen as the most suitable time to unveil a plaque in memory of Ruth Wanless, a founding member who had worked long and hard to help the organization develop so well and had remained an interested and active member until the time of her death February 20, 1975. She had once asked friends to donate to the Rehabilitation Society instead of sending flowers to her funeral. The plaque was paid for with these donations.
Pioneer members’ names engraved on that plaque were:

It was unveiled by Pearl Lawrence and Ida Nelson, and will hang in the auditorium at the Rehab Centre as a lasting memorial to a well-loved member.

Names of other long-time members and of those who have made outstanding contributions to the development of the Rehabilitation Society will be recorded on an honour roll, so that they too will be remembered as the years go by.
Twenty-five years of Rehabilitation history were represented by the members who met at the anniversary party that night. It was typical of these people that their problems and difficulties were ignored and that they enjoyed being together again tremendously. The hall rang with laughter as they recalled the many happy and humorous experiences, some of which hadn’t seemed that funny at the time of their happening.

A guest book was signed as the members arrived and now provides a permanent record of the evening.
As this story of the Rehabilitation Society unfolds, you will see many of these names again and again, and you will realize how much many of them contributed toward making the facilities and services enjoyed today possible. Both old and new members have every reason to be proud of the first twenty-five years of the Rehabilitation Society of Calgary for the Handicapped, and to look forward with enthusiasm and confidence to the next twenty-five.
​
(Twenty-five Years Proud, A History of The Rehabilitation Society of Calgary for the Handicapped, Elnora Hunt, 1975)